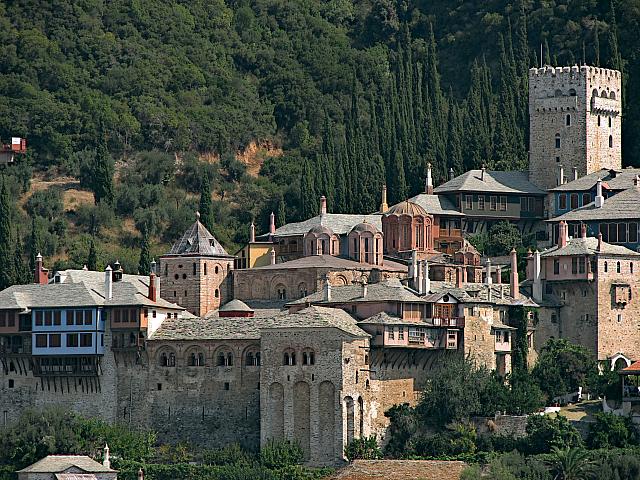 Eastern Orthodox Mount Athos
The monastery of Docheiariou originally dedicated to saint Nikolaos Myron, and later to the Archangels Michael and Gabriel, which is tenth in the hierarchy, was founded, according to tradition, in the second half of the l0th century A.D. by saint Euthymios, fellow-monk and pupil of saint Athanasios. In times of hardship, it was supported by Ioannis V Palaiologos and the king of Serbia Stefan IV. Gifts were bestowed upon it in later periods by the princes of Moldavia and Wallachia. In 1821 the monastery was abandoned and lost almost all its property.

The Monastery possesses a piece of the True Cross, relics of saints, sacred vessels, and vestments. Its library contains 545 manuscripts, 62 of which are on parchment, and more than 5,000 printed books. Today Docheiariou is the home of some 30 hard-working monks with an appreciation of the beautiful.