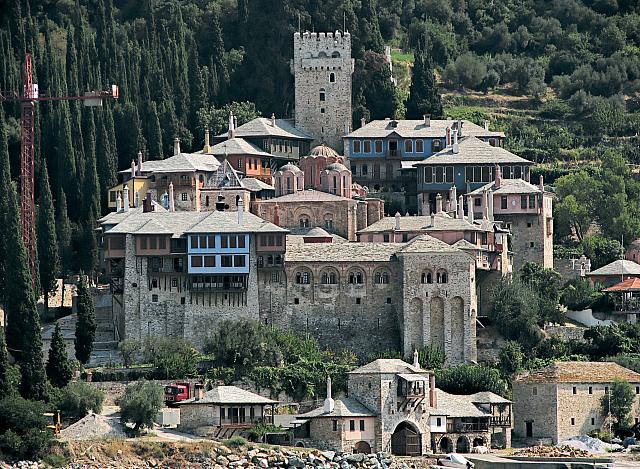 Mount Athos Eastern Orthodox The Blessed Euthymius, a companion in asceticism of St Athanasius the Athonite and docheiares (manciple) of the Megiste Lavra Monastery, is reputed to have been its founder. In all probability, Euthymius founded a small monastery dedicated to St Nicholas near the port of Dafni in the second half of the 10th century, but in the early 11th century pirate raids drove some of the monks, together with the founder, to the Monastery's present site. A little later, the katholikon of the Monastery was dedicated to the Archangels.
In the difficult times of the 14th century, the Emperor John V Palaeologus and the Prince of Serbia Stefan Dushan helped the Monastery in a variety of ways. In the 16th century, the priest Georgios from Adrianople dedicated himself and all his possessions to the Monastery. At the same period, with the help of Alexander, Prince of Moldo-Wallachia and his wife, Roxandra, the property of the Monastery was recovered from the Turks. The 17th century saw the restoration of the tower of the Monastery, while in 1660 it was given the title of 'stavropegic'. Its bell-tower was built in the 18th century. At the time of the Greek Revolution, the Turks tortured its monks and carried off its treasures.